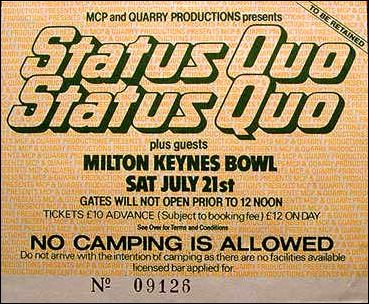 The year 1984 started furiously, the single "Marguerita Time" climbed up on No.3 of the british singles charts - January 5, 1984. A very untypical Quo-Song, which was discussed by many fans, the critics and the music press. Alan Lancaster refused this song. "This is definitely not Status Quo and I can't identy myself with this song". The dissonances within the band couldn't be hidden any longer and it was a shock when the message dropped in, that Alan Lancaster forbid the band by law to perform without him. (as it happened in the past) Alan Lancaster's home was since quite a while Australia and he couldn't come over, because he wanted to stay with his pregnant wife.

Listed below the publications in Jahr 1984 ( England + Germany)